France served notice they could be a serious threat at this year’s World Cup with a business-like win over Italy.

Italy were made to pay for indiscipline in the first half as Frederic Michalak kicked France into a 15-3 lead.

Giovanbattista Venditti hit back with a try for Italy, but veteran prop Nicolas Mas’s first try in 81 Tests secured the win for France.

The one low point for France was an injury to winger Yoann Huget, who was helped off the field in the second half after appearing to injure his knee.

France’s next game in Pool D is against Romania at London’s Olympic Stadium on Wednesday, while Italy face Canada in Leeds next Saturday.

But the key match is set to be France versus Six Nations champions Ireland, who thrashed Canada 50-7 in Cardiff earlier on Saturday. The Pool D runners-up will probably play reigning champions New Zealand in the quarter-finals.

Italy’s starting front row had 227 caps between them, including 113 for Martin Castrogiovanni, but they were given a torrid time in the early exchanges, conceding several penalties.

Talismanic captain and number eight Sergio Parisse might have instilled discipline among the Italian ranks, but he missed the match with a thigh injury.

Michalak could even afford to miss two kicks, both of which struck a post, as he chiselled out a 9-0 lead. The advantage would have been more had a Noa Nakaitaci try not been controversially disallowed. 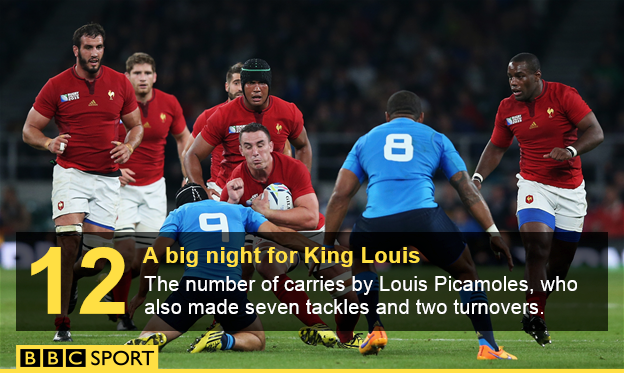 Clermont winger Nakaitaci seized on the loose ball beyond the touch-line after Louis Picamoles’ pass ricocheted off a defender.

However, just as Michalak was about to take the conversion, referee Craig Joubert caught sight of a replay on the big screen, which showed that Nakaitaci did not have control of the ball.

Joubert referred the decision back upstairs and Nakaitaci’s effort, which had already been judged fair by the television match official (TMO), was scrubbed from the scoreboard.

The latest confusion came after England’s World Cup opener against Fiji, when referee Jaco Peyper awarded Nikola Matawalu a try without reference to the TMO, only to overturn his decision when he saw the replay on the big screen.

Slipping through the gears

In the early stages of the second half, Philippe Saint-Andre’s side almost resembled the free-flowing French outfits of old.

Nakaitaci went zig-zagging down the left touchline and passed inside to Guilhem Guirado, only for the Toulon hooker to be brought down a yard short of the try-line.

A couple of phases later, Michalak put through the cutest of grubbers and prop Slimani went over for his first international try.

Italy replied when winger Venditti scampered down the blind-side and touched down next to the posts.

But Montpellier prop Mas broke his Test duck with 10 minutes remaining, touching down at the base of the post.

France, aware that four tries would earn them a crucial bonus point, kept coming in the closing stages but had to settle instead for a comfortable win.

“It looks like Yoann Huget has done his cruciate ligament – this is not the best news,” Saint-Andre told ITV Sport.

“He is a very important player and a big player to lose for this team. After that injury, for four or five minutes we were a bit shaky.

“It’s very important that we started with a win – we knew how tough Italy were. We wanted four tries but Italy defended well. We have started very well but we must continue. We have a win, but a bad injury.” 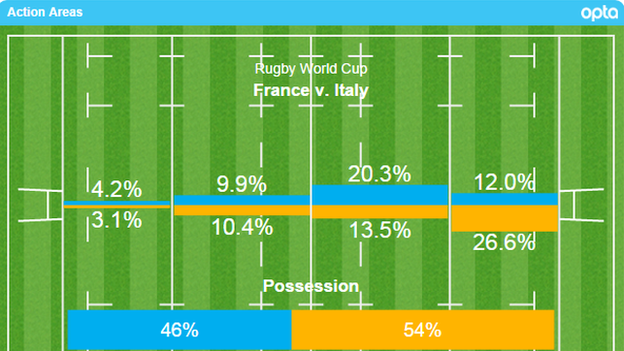 The possession and territory stats from the Group D match, with France making much more of their share and their field position